Share
Thanks so much for all your nice compliments on Lisa's quilt!
I guess I will show the video....thanks for the encouragement! 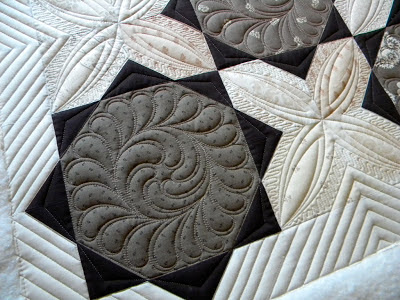 To view the video on how I do up this Motif and Feather Ring, check out my "Quilting Tips and Techniques" today on my other blog.

Michael, i love that comment, the sreect to finishing is starting i think that will make a great title for a blog.To often people worry about how it will end that they never start, and in reality many things in life that i have completed were never what i actually started. But staring something actually led to something else, which if i hadn’t started i would never have found. Its as if not starting limits our opportunities, not just to the goal we were originally thinking of, but other opportunities which tend to open up once we make a change to start something. As an example, i applied for a job that i didn’t think i was qualified for, at least it was a stretch, a fairly big step up, but decided i had nothing to lose so sent off my resume, to my surprise i got called for an interview and they offered me the role of he boss of the job i didn’t think i could do If i had never have applied for something i thought was too big, i would never have landed that even bigger role.We are often our own limitations, and we never know what we are truly capable of until we try.thanks for the comment, really got me thinking about my next blog

Here is how to make money with click bank.1.Go signup with click bank.choose best prcdout you like in marketing section and get affiliate link2.Sign with StudAds.com as advertiser advertise your affiliate linkThat is all what everyone is doing to make money with Click bankAs you pay $1 for 500 visitors in which you get 5-10 sales, each? sale commission about $20? so you get $100-200 for each $1 you spend on advertisingSpend $100 you will end making about $10,000 to $20,000